Bronzewing a re-issue of earlier recordings by Phyl Lobl in gratitude for the giving, the loving, but primarily 'the being', this CD is a tribute to Geri Lobl who in the main directed / produced / engineered and at times accompanied these works.

The decision to put this material on CD was two-fold. I want these to be a public form of recognition that pays tribute to Geri's skills, involvement and commitment which enabled the original discs to be. As the main performer I got the publicity and the photos. But no-one is an island and this looks lopsided to me now. His influence and skills as critic, were invaluable as was his loyalty and interest in my performing. You don't stop loving someone just because death has occurred and after watching his incredible attitude and fortitude in the face of the traumas he had to endure, my love and respect which since meeting him was always the most important thing in my life, became magnified many times. Other reasons are that people have asked for a CD, the songs are still relevant and not many people still have the equipment to play LP's. 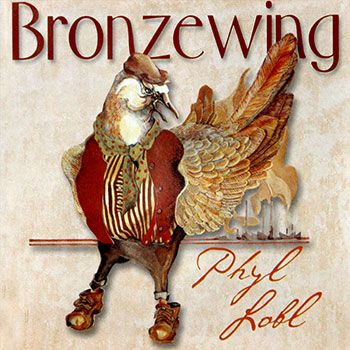 Named from this excerpt from The Australian Language by Sidney Baker: ‘Silvertail … a social – climber or society figure, contrasted with Coppertail or BRONZEWING which denote a Proletarian and refers to the Bronzewing Pigeon formerly found in large numbers in Australia.’

The original recordings have been kept 'as was' except for some omissions needed because of time restraints.
Accompaniment:
This CD mastered by Michael Roberts, Musycks Productions.
Cover Artwork: Bev Bruen from the songbook cover 'Songs of a Bronzwing'
CD Booklet Design: Louiville Graphics

Will You Fight, Will You Dare? ♪

Will You Fight, Will You Dare? – View Song Details

No Many Fish in The Harbour Today ♪

No Many Fish in The Harbour Today – View Song Details