I came to the country not planning to stay,
I just came to teach then to go far away,
But I met a farmer, wed to the land,
Now I'm his wife and I'm lending a hand.

Though I'm terrified of tractors and petrified of ploughs,
I'm grateful for Gumboots and comfortable with cows.

To me Herringbone* was just one sewing stitch,
I know not it's how you can never get rich,
It's a sticky, reeky, mucky, leaky, boggy milking shed,
That I have to be in instead of my bed.

We put in shed music, some good rock and roll,
We had to remove it if they all lost control,
They'd twist, twirl, and gyrate and shake well the udder,
We never got milk we just got instant butter.

We changed to fine music advised by the vet,
Now cows are so cultured it's yoghurt we get,
It comes in such flavours as Mozart and Strauss,
But puss thinks Debussy's de best from de cows.

We put in a TV that was a mistake,
The bull got so starstruck no heifer he'd take,
He went on strike in fact out of service,
He wanted a breeding role on Country Practice.

He went back in service and gave good dispatch,
When we put on the channel that showed Perfect Match,
But the news made him nervous, now with cows that aren't maids,
He's insisting on condoms, he doesn't want AIDS.

Its not Valentino might make us bail out,
Its high rates, low prices and Big Boys with clout,
They are the reasons we can't sleep at night,
But we won't give up farming without a good fight.

* References
A Herringbone shed is a type of milking shed named for the arrangement of its cowbails. 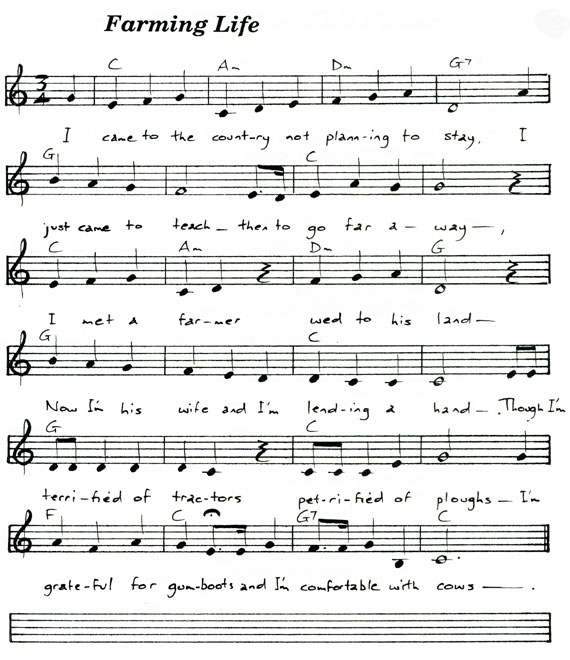