Song of The Fishing

Written with information from Captain Roscoe of 'Singna' and Steve Drake of 'Sea Sallow'.
Fishing like other trades has words associated with the work. Blackies are Black Fish Tackies are Yellow Tuna. Lobbies are Lobsters. A 'looped Paternoster' is a special knot and loop with beads and hooks. Originally Paternoster was a loop of beads on the Rosary to mean 'Our Father'. No doubt fisherman used it in the trade because they often pray for a good catch. 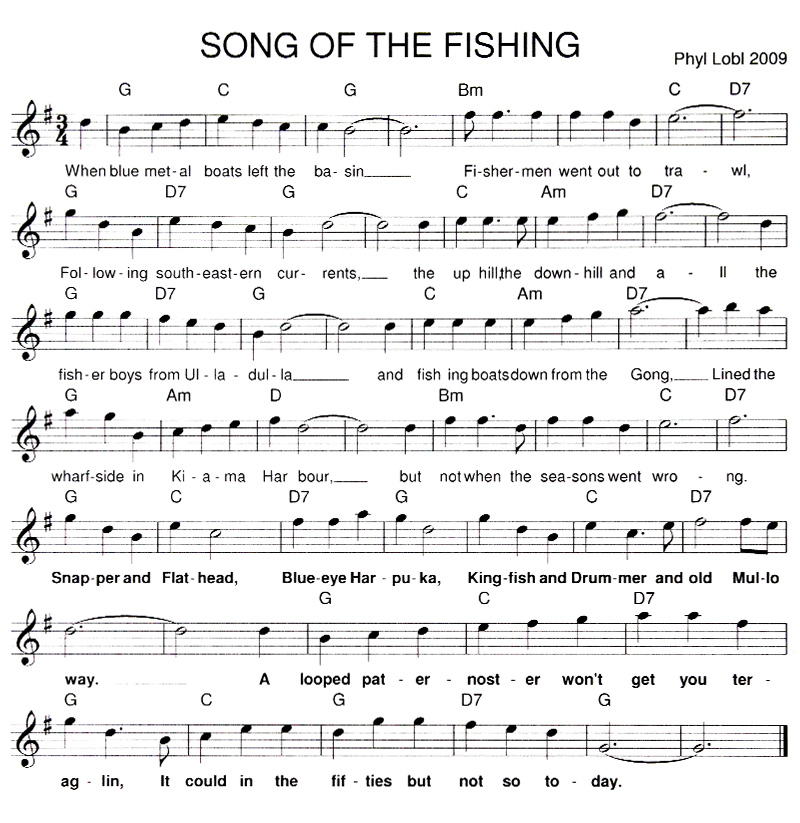 When blue metal boats left ‘The Basin’, fishermen went out to trawl,
Following South Eastern currents, the *‘uphill, the downhill an’ all’.
The fisher boys from *Ulladulla, and fishing boats down from the ‘Gong,
Lined the wharf-side in Kiama Harbour, but not when the seasons went wrong.

CHORUS
Snapper, Flathead, Blue Eye, Harpuka,
Kingfish, Drummer and old Mulloway.
A’ looped paternoster’ won’t get you Teraglin,
It could in the fifties, but not so today.

The Century’s turn capped the licence, choice just had to be made,
Stick with the risk of your father’s, or go with the tourist -led trade.
Keep your eyes peeled at the wheel now, for Flat Rock and old Southern Reef,
A freak wave is king of the ocean, and can bring a good boat to grief.

*‘Sea Swallow’s out looking for ‘Lobbies’, far from the harbour and shore,
With a *G.P.S finder, no worries, lost cages a hazard no more.
But sea sickness comes with the tourists, they want a cure ready-made,
*Roscoe says ‘Just find a Gumtree, you’ll find relief in its shade’.

Go gather the green weed for ‘Blackies’, you’ll win a yellow-fin load,
The old man said ‘Blackies for Yackies’ when he taught me the fisherman’s code.
The far, blue horizons will call them, the thrill of the hunt is in man,
They’ll catch, tag and throw back the fish now, or go for the chase when they can.