Research & compilation by Phyl Lobl
Illustration by Sputnik Lobl
This booklet is a distillation of the presentation ‘WASN’T THAT A TIME’ at the 50th National Folk Festival Friday 25 March 2016 in the Trocadero by:
Phyl Lobl, Margret RoadKnight, Shayna Stewart, Mary Traynor, Maureen Cummuskey
CULTURAL MAINTENANCE & GROWTH BECAME ‘FESTIVALISED’ 1967
Before 1967, realisation of the value of folklore and its products in the art-forms of poetry, song, music, dance and crafts was having a revival throughout the western world.
There was also awareness that ordinary people had perceptions and skills they could use to:
1. Reveal their reality.
2. Relate the history of that reality.
3. Relieve that reality.
Many Australians were already alerted to this value by the work of performers, collectors, writers and academics:
1832 Frank The Poet, 1857 Charles Thatcher, 1905 Banjo Patterson, Henry Lawson
1920 Julian Stuart, Louis Lavater, Vance & Nettie Palmer, Alan Marshall, Bill Wannan
The fifties especially saw a heightened interest. The sixties saw a strengthening of this interest. 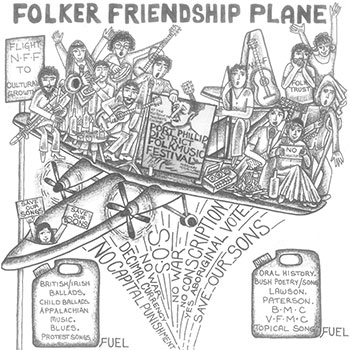 Get a copy of the NFF 50th Presentation