The Old White Fox he lived among a forest of Top-hats.
And moved with ease between the trees of High Society cats.
He drank the champagne bubbles from a never-ending stream
Of hand-cut crystal glasses and became a vignerons dream.

He was Very Venerable, Highly Honorable,
With a thirst unquenchable,
He proved to be most pensionable,
And many things unmentionable,
That Old White Fox.

The Old White Fox's Lady she wore the finest clothes,
The name-tags on the necklines she carefully chose.
Dior, Balenciaga, with such names she clothed her waist.
But when it came to choosing men she seemed to lose her taste.

He was Very Venerable, Highly Honorable,
Wearer of a big Top Hat,
I'd not have thought of Diplomat,
Unless it was in Ararat,
For Old White Fox.

The Talking Tombstone paved the way when Old White Fox was bought,
But being sent an embarrassment an answer soon was sought,
They sent him off to Paris with a princely store of grog,
And hoped and prayed that very soon he'd turn into a frog.

He was Very Venerable, Highly Honorable,
Most Ambassadorial,
In a suite sartorial,
But proved Coup D'Etorial,
That Old White Fox.

Joined the long long list you see
Of those who fade with history
That's why he's always pissed you see
That Old White Fox. 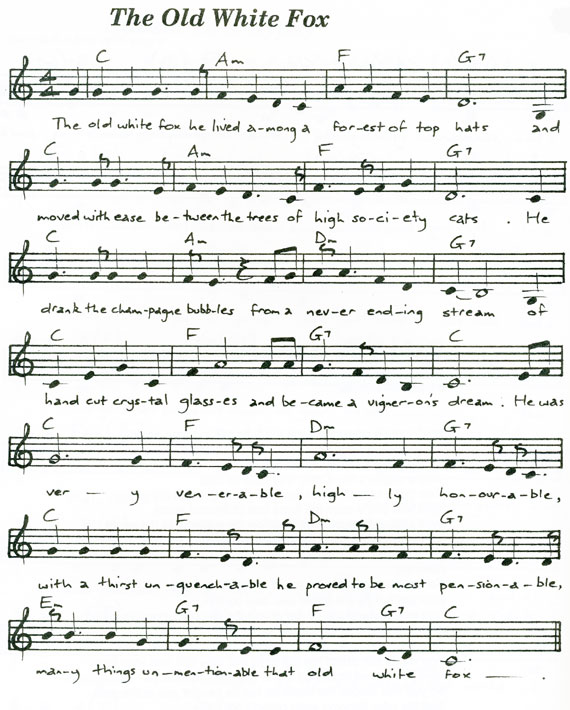