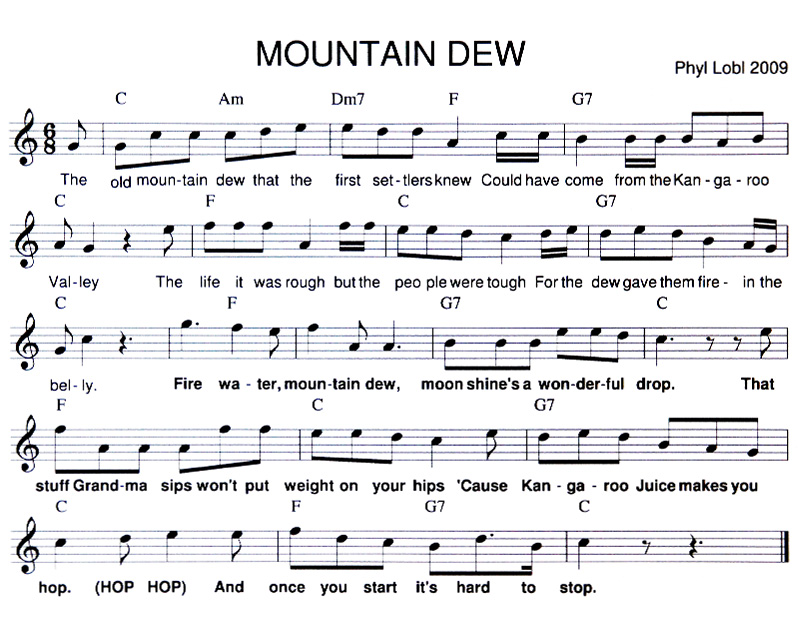 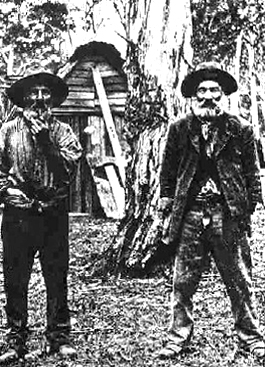 The old mountain dew that the first settlers knew,
Could have come from the Kangaroo Valley.
The life it was rough but the people were tough,
For the dew gave them fire in the belly.

CHORUS
Fire water, mountain dew,
Moonshine's a wonderful drop.
That stuff Grandma sips won't put weight on your hips,
Cause Kangaroo Juice makes you hop, (Hop, hop)
And once you start it's hard to stop.

A still was forbidden but it could be hidden,
Behind water-falls night and day.
Cops couldn't connect cause they failed to detect,
The smoke, through the waterfall's spray.

Let me be explicit the grog was illicit,
But that only sweetened the taste.
And if coppers came looking to see what was cooking,
Moonshiners could hide without haste.

*Tommy and Teddy were willing and ready,
To follow *Ma Humphries lessons.
Though they shouldn't oughta they made fire water,
Made it with Grand Mother's blessin's.

SLOWLY
Alas one said day the boys were put away,
Leaving Gran in a nasty old fix.
Her supplies grew so low she decided to go,
And she died aged one hundred and six.

* References
Moonshine & Mountain Dew - Names for any kind of alcohol made in secret to avoid high taxes or bans on alcohol, usually whisky or rum.
Still - a copper container with an elbow-shaped pipe attached to a copper coil and water barrel usually set-up near a water supply.
Tommy & Teddy Humphries - Real people fined for illegal distilling according to court notes.
Ma Humphries - It is claimed she died at 106.
Barrengary - Small village north of Kangaroo Valley in the Southern Highlands.