Rests are used in bars of music for times of silence in the same way as notes are used for times of sound.
The rest symbols are equal in time to the time taken by note symbols.

Music is written on a frame of lines called a stave.
You will learn much more about staves in PART 3 of NOT JUST NOISE PLAINSPEAK SESSIONS.

These rests are shown on the lines of a stave.

Hints to help to remember of Rest Symbols

The whole-rest hangs down below the line of the stave making a flat top and resembling a bunk-bed.
A lie down on a bed is a long rest.

Semi-breve rest is equal in length to a whole note or semi-breve.

The half-rest sits up from the line.
Sitting up as in a chair gives a shorter rest.

Half-rest or minim rest is equal in length to a minim or half note.

The quarter-rest is like a person resting by standing still.

Quarter rest or crotchet rest is equal in length to a quarter-note or crotchet.

The eighth and sixteenth rests have hooks and notes of the same name have hooks as well.
That makes them easy to recognise.

Family of Rests and Notes

Words can be written for rests too but they use the sound ‘s’ for silence instead of ‘t’ for tone.

At first, you can whisper the ‘music time-words for silence’ but later you can just think them in your mind.
As you just feel the beats for the words they represent, they become beats of silence.

Here are some bars of time containing notes and rests.
Say the Time and Rest names as you beat the meter that the time signature gives you. 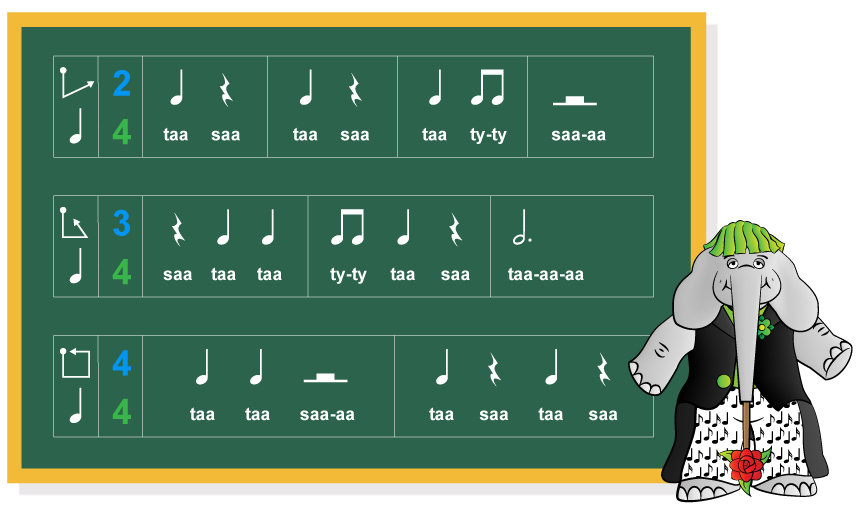