Music is Brain Food - An Introduction

I believe that ‘music is brain-food’ because eminent teacher/musicians, countless other teachers, and science researchers have found it to be so. My hope is that these sessions might help adult – guides steer more children into paths of music.

“I would teach children music, physics and philosophy; but more importantly music; for in the patterns of music and all the arts, are the keys to learning.”

“Music is a fundamental human right.”

They are certainly not the only ones.

‘Music Is Brain Food’ has long been almost a mantra I would use when speaking to parents of children to whom I taught Performing Arts, especially music.
I ran such a program in several Public Primary Schools in NSW, in one for a period of well over a decade.

During those years I developed a Program I called ‘NOT JUST NOISE’ which was published as a Music Teaching Kit and comprised of three parts.

The cost of the published N.J.N.Kit was prohibitive so it was not a commercial success.
As a contact at Oxford University Press remarked ‘This is a Rolls Royce Product for a Ford Escort market.’

I have since modified the program and added innovative material based on basic movements. I have given time and effort and money because I believe ‘NOT JUST NOISE’ offers assistance to people to utilise the Brain Food of music.
There is no cost attached to using the material from this site.

Developments in Neuro Science have strengthened my resolve to create an on-line version.
Science has proof that music-making joins synapses in the brain.
The internet offers links to verify the claim.

10 benefits of music education that highlight why it should be an integral part of students’ lives – whether inside or outside of school.

A recent two-year study by researchers at the Brain and Creativity Institute (BCI)  shows that “exposure to music and music instruction accelerates the brain development of young children in the areas responsible for language development, sound, reading skill and speech perception.”

The reason I developed ‘NOT JUST NOISE’ is because I found traditional ways of teaching music can be confusing. Use of ‘French Time Names’ is one area which I adapted to be more logical. In my personal experience, important concepts are often not taught.

Excellent musicians do not necessarily make excellent music teachers.
I have attended training courses in several popular music teaching methods; Orff, Kodaly, Suzuki, and Dalcroze. I found these wanting to some degree, but I have adapted aspects from ALL of them in ‘NOT JUST NOISE’.

Knowledge and recognition of intervals by using  ‘Ear Training Songs’.

Basic movements which ‘Not Just Noise’ shows as line patterns to aid deciphering Duration of Notation and internalising rhythms.

There are to be two forms of the ‘NOT JUST NOISE’ program on this site. 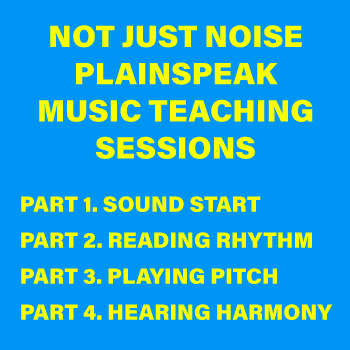 Possible to be used to cover Music Lessons over four Terms of Primary School. 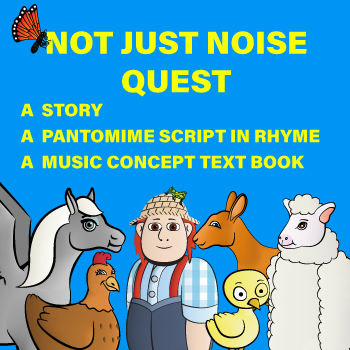 A rhymed version containing similar content in Four  Acts. This version has a Story-line and Characters and could be adapted as a stage performance.

COMING SOON
Back to Music Education Program 'Not Just Noise'