Daisy is painted with a new design every few months in order to advertise Arts & Happenings. To find the tune, especially for the verse, try googling 'Daisy Daisy'.

As part of the 'Memories of Kiama' project I sat by Daisy and wondered about her past lives, prompted too by my past life as daughter of a woman who kept a 'house vow' for as long as she could. 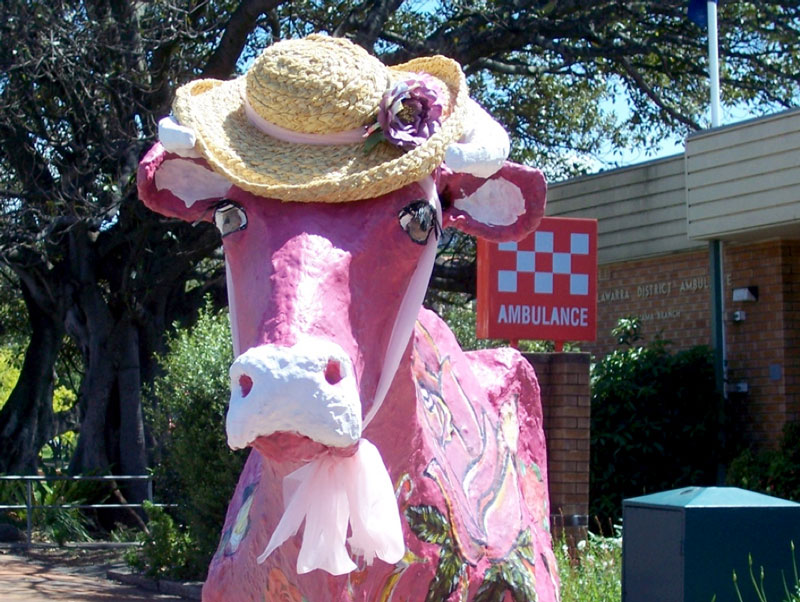 They planned a festival down the coast,nine-teen-ninety-one,
Ernesto Murgo he worked the most on Daisy the colourful cow.
Wire and paper and kids willing hands, skateboard to help her ‘mooove‘,
Painted coat then of a clever design and Daisy was ready to groove.
CHORUS
*Daisy, Daisy, Kiama’s community Cow,
Striped or Paisley what colour is she now?
The tourist-camera angles,
Record her spots and spangles.
We’d like the lot, so send your shot,
Of our crazy, chameleon, cow.
Daisy rolled out as the months rolled on, gaily, daily.
Many a group gave a bovine design to Daisy the colourful cow.
Soon came the day that Ernesto said ‘Time now to do her in,
Her form no longer gives pleasure to me it’s the *knackery or it’s the bin’.
The council they counselled as councils do, noted, voted,
Offered a price to Ernesto too and rescued that colourful cow.
All-round the world towns are rolling out cows in the thor-ough-fares,
Could Kiama’s Daisy have been the first the one to inspire theirs?
AFTER LAST CHORUS:
That crazy & comical,
True anatomical,
Coloured kaleidoscope cow.
* References
Knackery - Term used to describe place for killing of aged animals.
Ernesto Murgo - Italian-born sculptor of note who constructed Daisy in 1991.
‘Daisy’ - Was made to stimulate the Arts in Kiama in 1991 and has been re-painted by Community Groups to advertise Exhibitions in the Old Fire Station’ ever since.